Here in our little corner of Pasadena, Lake Avenue stands as the main thoroughfare through this part of town. People who come from out of town most likely think of Colorado Street, where the fancier businesses and restaurants are located, but for us, Lake is where a lot of our life transgresses. A significant part of our days revolve around this street. We regularly shop at the Trader Joe’s, often eat lunch at Float, and we used to have late-night froyo or boba excursions here on Lake after ballroom practices.

That said, Lake hasn’t changed much in all the time we’ve been living here. Well, ok, what I mean to say is that feel of it hasn’t changed much. Numerous stores and shops have come and gone. Sugarfish by Sushi Nozawa is one such example. And, of course, Philz Coffee, where you can find me at every Saturday without fail. But I digress. My point is that wherever you go on Lake Avenue, everything feels pretty small and local. It’s a feeling that is a bit reminiscent of Berkeley, though with a lot less charm to be sure.

Brü seems to want to break that feeling. There was definitely a bit of that feeling you get when a loud and rambunctious new kid struts onto the middle of the playground while in the middle of the school year. There was a greeter stationed outside to show us to our table, and I can only describe the interior as grand and expansive. There are two floors to the restaurant, but the second floor doesn’t start until you get about halfway in, so the ceiling is way high up. I definitely felt small while we were being shown to our seats. Previously, this location was home to a trattoria, and whoever did the interior designing for Brü preserved much of the soul of its predecessor.

There were many flat-screen televisions hanging on the walls and a large bar flanked by a gigantic wine rack that reached all the way to a ceiling. Not only did the restaurant have height, it also had enormous depth; all in all, I’d bet that 500 people could easily fit inside the space. These aspects definitely make Brü stand in stark but tasteful contrast with the other stores and restaurants on Lake Avenue, which are all much smaller in comparison. I don’t dislike the juxtaposition.

We each ordered a cocktail upon being seated, since we had walked over instead of driving. I got the Cucumber Jalapeño Margarita, a mixture of jalapeño-infused agave syrup, cucumber water, and tequila garnished with more slices of cucumber and rimmed with chili powder. Mengsha got the Absinthe Sour, which consisted of absinthe, vodka, lemon, and egg white. 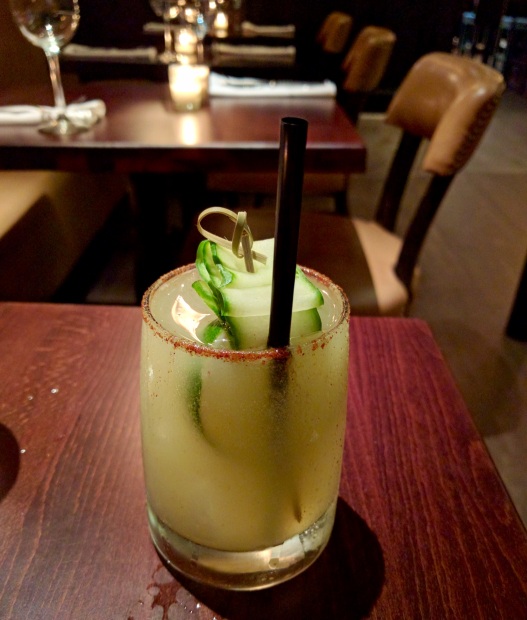 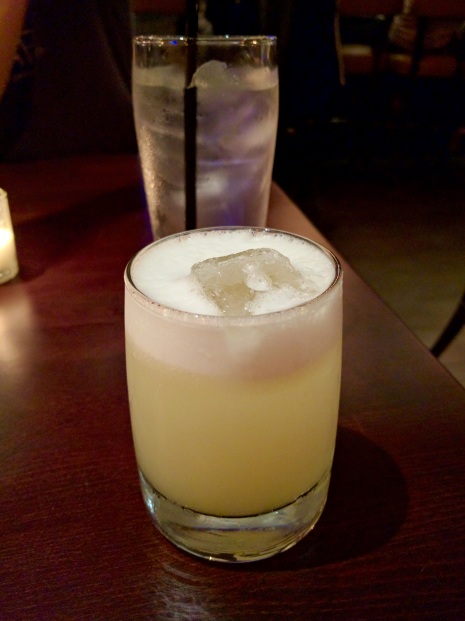 You know that feeling you get when you’re dining with a friend, and after your respective drinks arrive and you each taste the others’, you realize you should have ordered what your dining companion ordered? Well, I get that all the time when we go out to eat.

But not this time! Mengsha’s drink was not clearly superior to mine. Both were tasty and had their merits, but I liked mine a tad bit more, perhaps because the absinthe did indeed taste a bit too medicinal. My margarita was a bit sweeter than a margarita probably should have been, but that served to counter the bite from the jalapeno and chili powder. It is not very often that I don’t feel a tiny twinge of regret upon tasting Mengsha’s order.

That feeling returned in full force when our main courses arrived. I had ordered the Scottish Salmon which, despite the dish’s name, is dressed with a miso soy glaze and accompanied with baby bok choy, black rice, and pickled shimeji mushrooms. It was… acceptable.

Mengsha ordered the Grilled Duroc Pork Chop, which arrived on a cushion of mascarpone polenta and was decorated with cranberry apple chutney, pomegranate molasses gastrique, pomegranate seeds, and green beans. Honestly, every time we go out to eat I should just let Mengsha order and then tell the waiter “I’ll have what she’s having.”

By far the best thing I tasted that night was that mascarpone polenta. It has officially displaced my previously favorite polenta from Guerilla Cafe in Berkeley. It was delightfully creamy, both in texture as well as flavor, as well as having a solid enough consistency to be very hearty.  It was seriously delicious, and it elevated the pork along for the ride. The punctuating notes of the pomegranate seeds were a great finishing touch as well. I kept sneaking small spoonfuls of polenta off Mengsha’s plate; I couldn’t get enough of it.

We polished off our main courses quickly and got their Vanilla Bread Pudding for dessert. It arrived piping hot with bubbling chocolate kahlua sauce, topped with panna cotta ice cream, and festooned with colorful berries. Like every bread pudding I’ve ever had, it was delightfully sweet, rich, and filling, which was great since we both weren’t entirely full from our entrees. 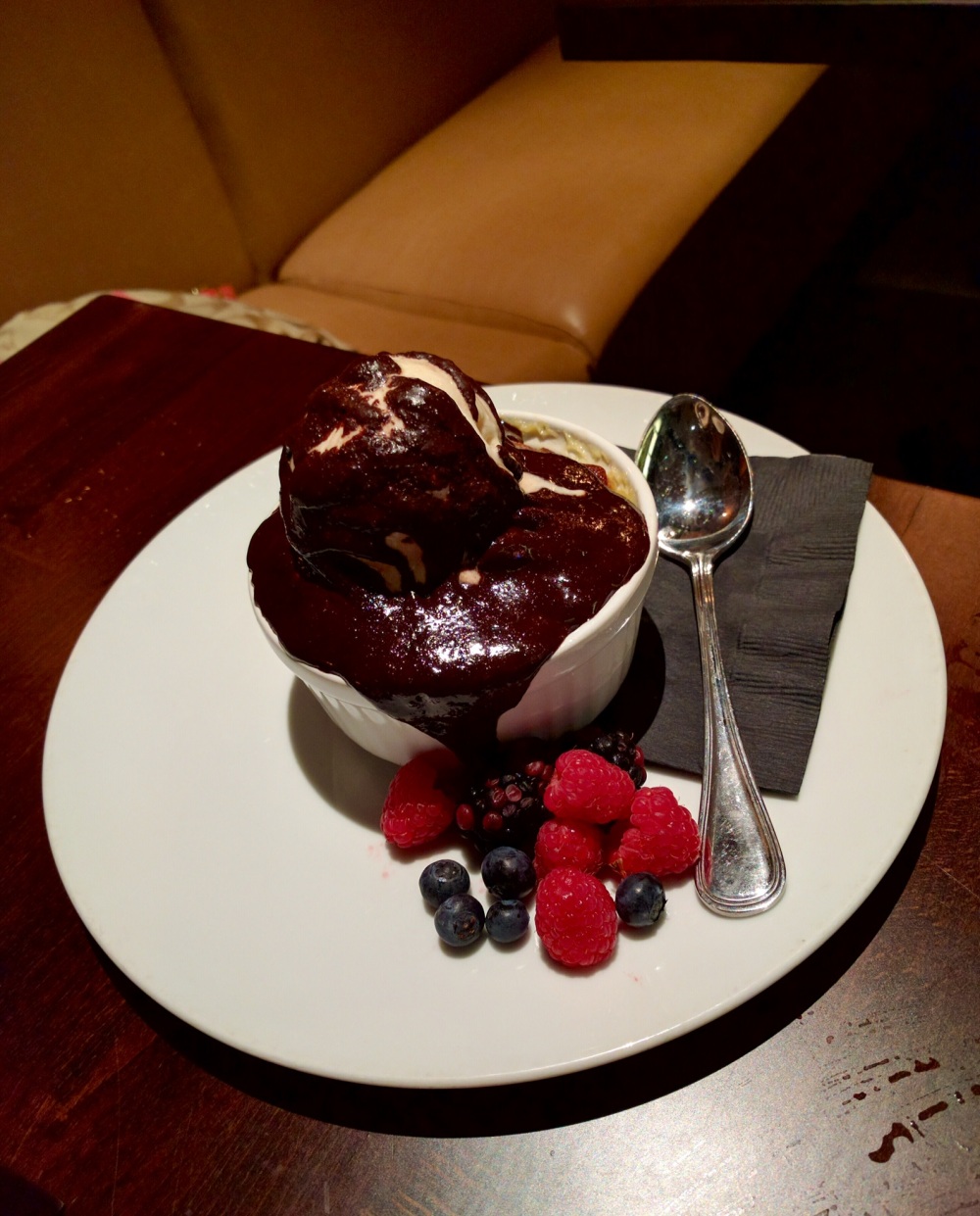 It really is difficult for any New American restaurant to stand out these days, especially when it comes to the food. The service at Brü was great: our server was professional and pretty much never missed a beat – a good sign, seeing as Brü had only been open for a week. The enthusiasm in the restaurant was high from the other diners and patrons (it certainly helped that there were quite a few rowdy sports fans watching the Dodgers vs. Cubs game at the bar). I also quite like the vibe the restaurant has gone for with its interior design choices. So yes, Brü is definitely above the competition. Hopefully those traits hold true after the initial just-opened enthusiasm has subsided.

The problem though is that New American is never something either of us crave. I’ll crave ramen, sushi, pho, or burgers, but never New American. Indeed, dining at a New American establishment is a very safe choice, where you know there will be something for everyone. Mengsha ordered the pork chop because it was the only dish that looked interesting, and I have to agree. I don’t know what was going through my head when I decided to order my miso-dressed salmon; I certainly wasn’t rewarded for it.

But, and I try to stress this fact often, we’re pretty snobby about our food. If you’re a resident of Pasadena or a nearby town and are looking for a decent New American place to try out, Brü is a good option, especially if you like a bit of sports bar enthusiasm thrown in for additional ambiance. But while you’re in the area, Magnolia House and SECO serve a similar cuisine, and both are right in the neighborhood. They all have decent cocktails and, from our experience, decent service. Just order on the adventurous side.