Sean: Recently we’ve been super busy with moving into a new apartment. In my case I’m also preparing to start a new job in less than two weeks’ time. As a consequence, we ended up breaking the one cardinal rule we laid down for ourselves when we set out on starting this blog: that we would not go out to eat at a place that we’d end up writing about if we still had a review in the works. Frankly though, I don’t think either of us felt all that guilty about it.

Anyways, for any of you dear readers who have been following along with us on our foodie forays, we eat Japanese food a lot more than we eat any other type of cuisine. While it’s true that the two of us love all sorts of Japanese food, be it sushi, ramen, or izakaya-type dishes, we by no means limit ourselves to any single cuisine. So when it came time to choose which restaurant review to publish first, El Metate or Matsuri, we figured we’d knock out the non-Japanese restaurant review first.

El Metate is a small Mexican joint tucked along a side street off of Colorado Avenue, just a few blocks away from the more-popular Amigo’s. The way they’ve decorated their walls, along with the tiled floor, put us in mind of a saloon courtyard in the Wild West. Their menu is quite exhaustive, but we both ordered off the list of daily specials. I got the potato molé off, since I’d heard about molé before but had never tried it. Mengsha ordered the fish tacos. We paid at the counter and then found a table.

As is customary with any Mexican restaurant, we were given a complimentary basket of chips and salsa. There were many types of salsa to choose from, from a light pico de gallo to a smoky chipotle salsa and a spicy salsa verde. They also had a peanut salsa, which will be next on our list to try when we return. All three were good, though not better than what you can get at any other decent Mexican joint. The freshness, however, did make an impression. The chips in the basket were still warm with that straight-from-the-oven smell, and the tomatoes and onions in the pico were firm and juicy. All of the salsas were less salty than what we were used to, and while the spice was enough to lift the dishes to more-than-comfort food, none of them were overwhelmingly spicy. 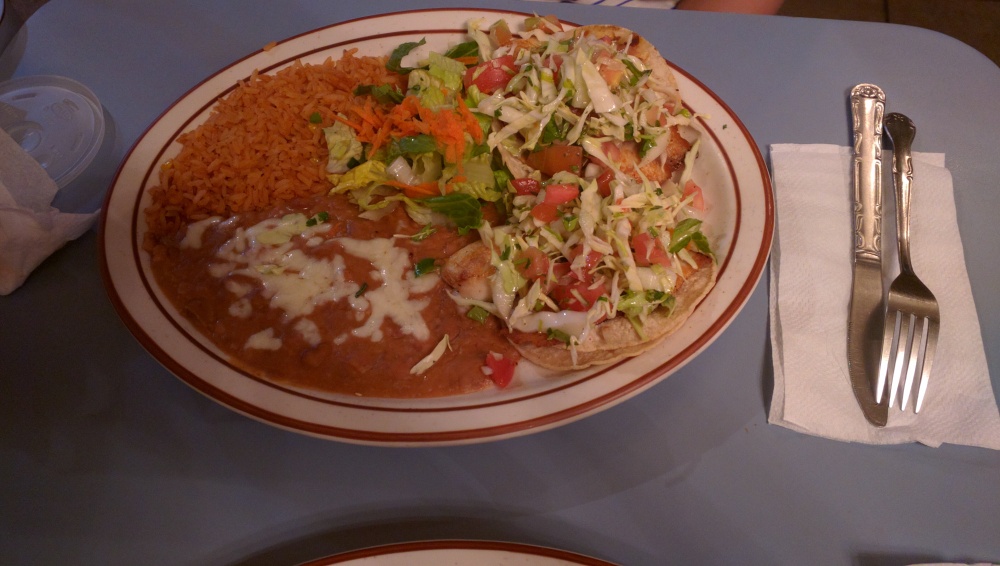 Our orders arrived on large platters with sides including salad, refried beans, and rice drizzled with gooey melted cheese. I wasn’t sure what my order was going to look like before it arrived, but what was placed before me looked like enchiladas covered with a generous helping of molé sauce. For those of you who don’t know what molé is, it’s a thick sauce typically made with a diverse array of spices like cinnamon, star anise, coriander, oregano, and peanuts, along with chili and chocolate. The consistency reminded me of curry. I can’t promise that the molé at El Metate was authentic, (we need more experience with Mexican food!) but it was pretty darn good.

Upon my first bite of my molé-covered potato enchilada, I was having trouble coming up with an adequate description, because the flavor was quite complex. On the surface, it was mostly smoky and earthy, but there were also hints of nuttiness and sweetness. The molé paired very well with the enchiladas, which were stuffed with potatoes and cheese. The potatoes provided the substance, and the molé added velvety personality. Overall, a very filling and satisfying meal.

Mengsha: The Mexican I’ve had has largely been comfort food, and El Metate is no exception. The beans ooze with flavor and satisfaction, but the rice is dry. The tacos were decent – the fish fried and well flavored, and covered in tomatoes and strips of cabbage reminiscent of a coleslaw. Tacos for me are always a mess. Can anyone eat tacos neatly? The question comes of whether you’re willing to lick the remaining sauce from your fingers, and these were worthy.

Around our neighborhood, El Metate is better than average if you’re looking for Mexican food. Sean thinks its food is better than Amigo’s food, and it’s certainly more authentic than Chipotle’s. We wouldn’t classify it as a restaurant that you should go out of your way for though. But seeing as it’s so close to where we now live, we’ll probably be back.