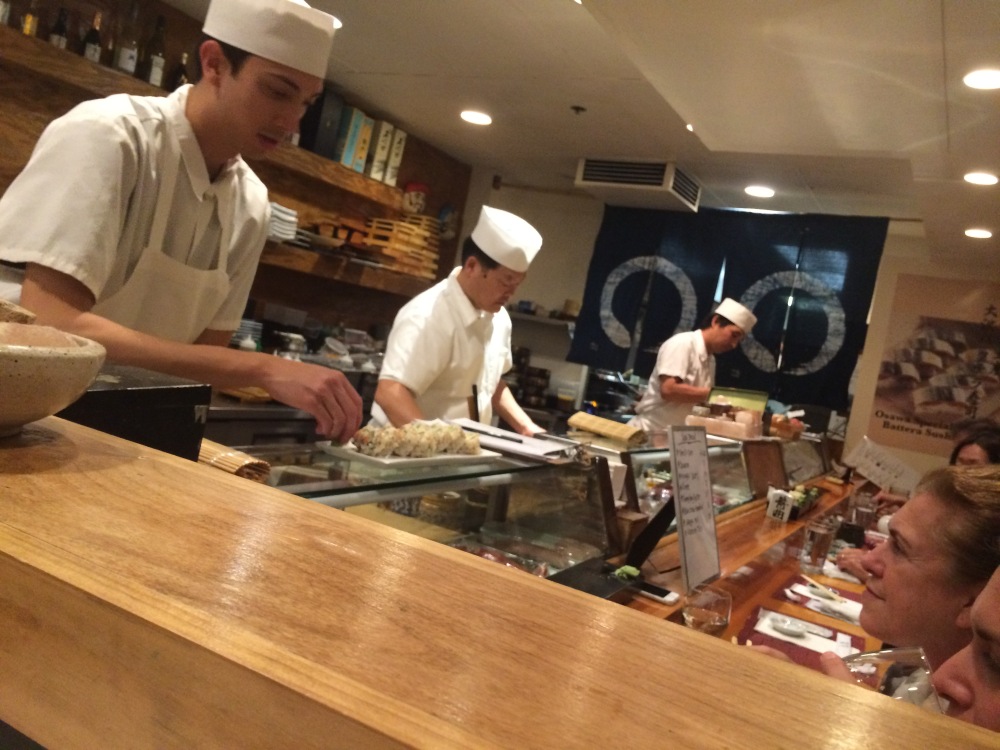 Mengsha: It’s been so hot in LA recently, I haven’t felt like eating proper meals. Burning calories? No thanks. So when we were too lazy to cook and Sean suggested hot pot, I was reluctant. Hot pot is winter food. I couldn’t come up with anything better though, so we called in (make sure you have a reservation if you want to sit at the shabu shabu counter), and headed over to Osawa.

Shabu shabu translates literally into “swish swish” – referring to the the action of swishing your thinly sliced meats in the boiling broth to cook them. The pot is on, or built into, the table, and everything is cooked as you eat. After we placed our orders (Sean ordered the pork and I ordered the ribeye), the chef working behind the counter poured broth into the hot pots in front of us – tonkotsu broth for Sean, and a clear broth for me – and turned on the burner. As we waited for the broth to boil, we asked for cold appetisers to stave off the summer weather: mizuna salad and their special of the day, fresh Washington oysters for a dollar each, an absolute steal. 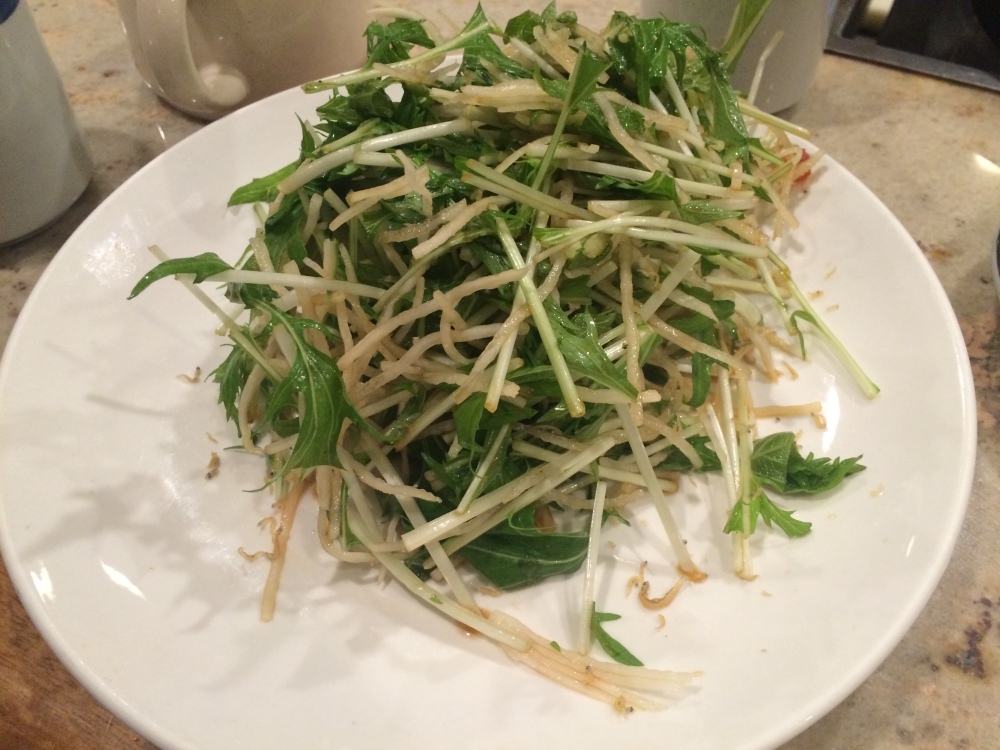 The salad was a surprise; we’d never had mizuna before. It was crunchy and refreshing and had a flavor somewhere between mint and shiso leaf. The white stems of the vegetable were juicy and cold, and blended in with thin strips of daikon radish. It wasn’t until you bit in that you could tell them apart. The daikon just completely imbibed the flavor of the Japanese plum vinaigrette. At the bottom, there were crunchy fried fish, half a centimeter long each, like tiny croutons. It was the perfect match for the 80 degree weather. 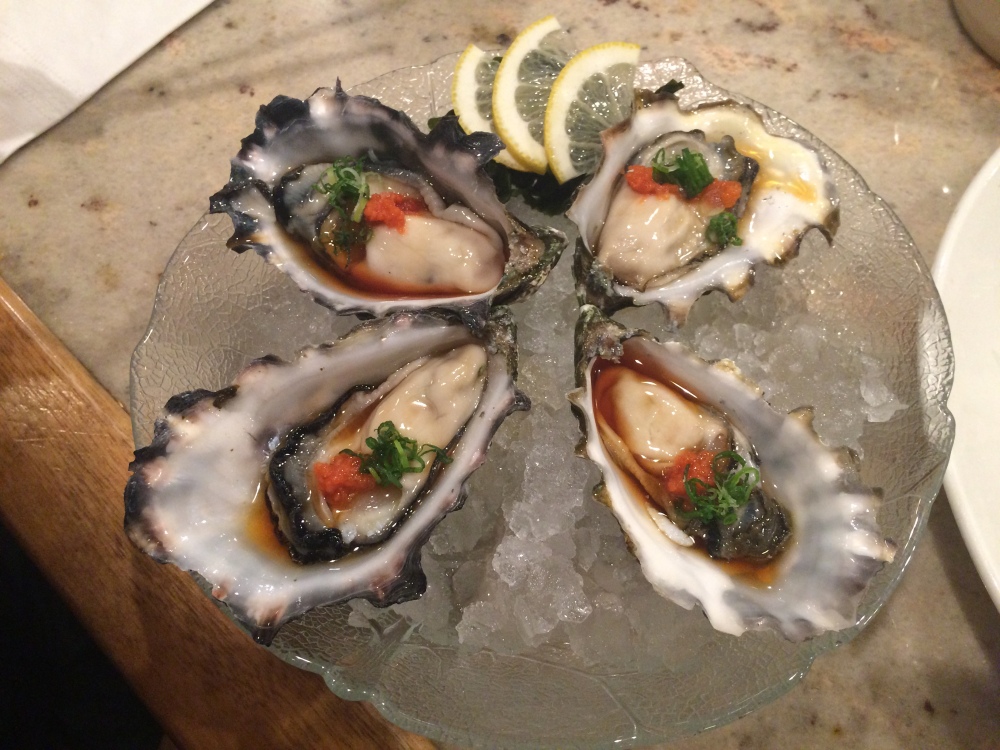 Sean: The oysters were meaty, juicy, and drizzled over with ponzu, scallions, and grated radish. Personally, I really like how Japanese restaurants prepare oysters; they usually replace the brine with ponzu sauce. Mengsha is of the opinion that these additions detract too much from the pure taste of the oysters themselves, which is understandable. If you like Japanese-style oysters though, Osawa’s were definitely a great deal.

This was our fifth time dining at Osawa, our third time at the shabu shabu counter. While their non-shabu shabu offerings aren’t as impressive, we’ve found that their shabu shabu experience is of a consistently higher quality than other places we’ve thus far sampled.

Our appetites thoroughly whetted after those appetizers, we settled in for our respective main courses. The vegetables that Osawa presents you with (enoki and shiitake mushrooms, spinach, napa, glass noodles, tofu, green onion) are very crisp and fresh, and their rice has a very even consistency, with a clean flavor and striking the perfect balance between being not too firm and not too soft. The orders also include a helping of noodles: ramen noodles to go with the pork, and udon noodles to go with the ribeye. We dipped some spinach into my light tonkotsu broth, and after a few quick swirls, slurped it down. The leaves were slick with broth, which was just the right amount of seasoning for it – simple and delicious. 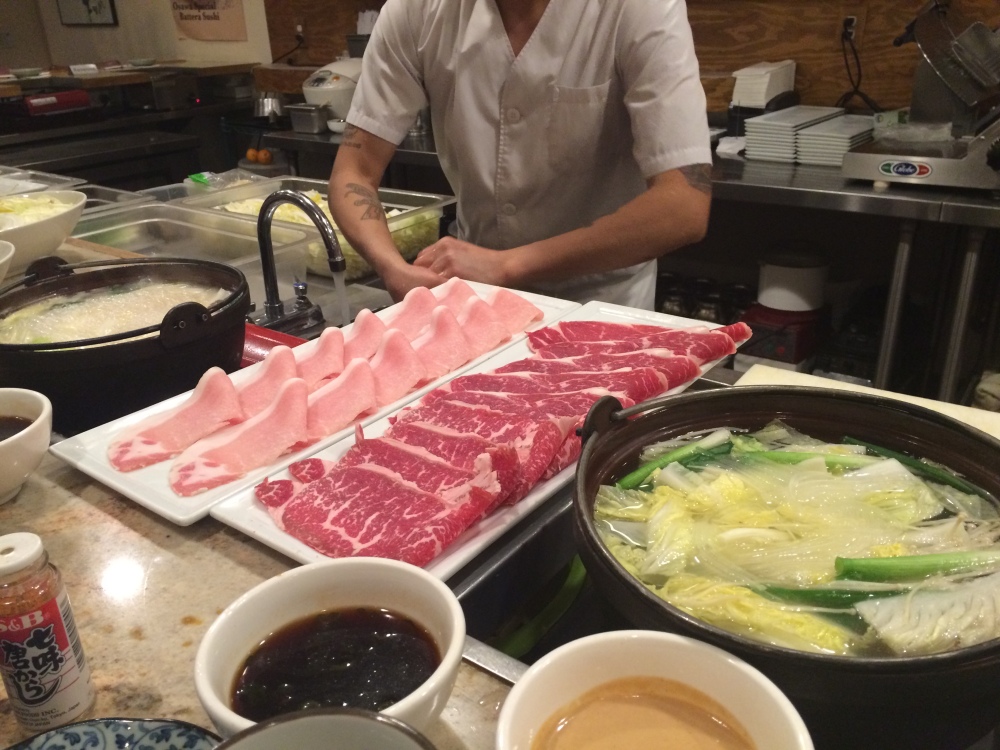 The pork was very hearty but toughened up quickly. It was hard to get the exact  texture right, and the fat was a little too rich all concentrated on the edge of each slice. The broth, though, was delicious. The ribeye was more flavorful than the pork, but was on the slim side for shabu. Beef for hot pot needs more fat. Still, if you cooked it perfectly, it still fell apart on the tongue. If you’re in the mood and have the means to splurge, it doesn’t hold a candle to their $89 Wagyu. (We’ve had one slice each. It was heaven.) Since my broth wasn’t flavored, the beef was best dipped first into the sesame sauce and then into the soy and ponzu sauce with green onions.

After all the meat and vegetables are eaten, you’re left with an amazing broth that has absorbed so much meat essence. I cooked my ramen noodles al dente and enjoyed them with the broth. This DIY bowl of ramen tasted better than most run-of-the-mill ramen shops’ offerings. The broth is so addicting that you want to keep slurping more of it despite how full your stomach feels. 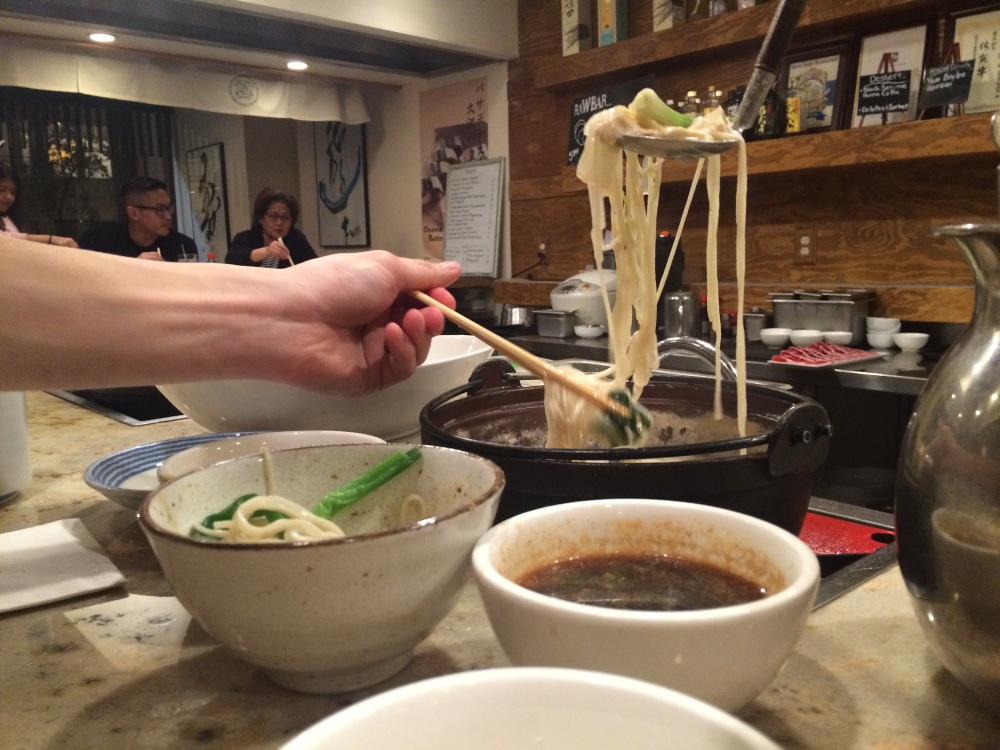 We didn’t choose to get dessert this time – we were so full from the broth – but their special, the black sesame panna cotta, is definitely worth trying. We’ve also ordered sushi here – the portions tend to be fresh but small for the price.

Overall, with the salad, oysters, and hot pot, our bill came to $60 before tip. You can definitely get shabu shabu for less at other places, but Osawa will make sure you are eating the best quality ingredients at the shabu bar. When you leave, you hear the trademark of Japanese hospitality: “Arigatou gozaimasu!”