King’s Row is a gastropub, which means it places as much emphasis and pride on its food as on its drinks. It’s become one of our favorites places to go, with a group anywhere from two to ten people. It serves traditional pub food – with a slightly snobbish twist. (The prices are still reasonable, so you don’t mind.) What might surprise you is that they also serve brunch, and while the two-room pub is crowded and loud in the evenings, often with live music, it tends to be serene and a balm to your hangover the next morning.

At brunch, our group loves to get the carafes of mimosa, or for the more savory-minded, their spicy Bloody Mary. In the evenings, anything goes, and their beer, wine, and cocktail/liquor selection ensures that there’s something for everyone.

Sean: Most recently, we rolled into King’s Row on a rainy Sunday morning (cue the Maroon V song), just the two of us. We ordered at the bar – Mengsha french toast and a coffee, and I got the breakfast burrito and a Bloody Mary – and we took our number to an empty table for four.  A few other patrons were at the pub, enough to make it feel cozy, but not too many that it was crowded. The sound of rain pelting the windows made the place seem even warmer in comparison, something you certainly don’t get much of in Southern California.

Our drinks arrived first. The Bloody Mary is dressed with a slice of lemon, lime, an olive, and a green bean. It’s very savory and spicy, with hints of citrus and pepper. Mine was not skimping at all on the vodka front; I was feeling the buzz after a few sips. To be fair, I hadn’t had breakfast yet. Flavor-wise, it was a bit too strong. I would have preferred it a bit milder.

Then came the burrito. It’s chock full of eggs, and bacon, with some hash browns, cheese, and guac. It’s great breakfast fare, and I’m being really nitpicky when I say this: I would have liked it more if there was a bit less egg and more cheese, guac, and potatoes. I’d put King’s Row’s breakfast burrito in the category right under ‘best breakfast burrito I’ve ever had.’ That honor goes to San Francisco’s Cafe Arlequin. Still, King’s Row’s burrito was delicious paired with the smoky and tangy salsa.

Mengsha: On this particular Sunday morning, I was on driving duty. They serve coffee like a diner, giving me a huge shot-glass full of half and half, sugar packets, and refills without me having to ask. I wasn’t quite awake yet, so I very much appreciated not having to talk.

I sneaked a couple of bites of Sean’s breakfast burrito before my food came. King’s Row makes you do that – it’s one of those places where everything is so good that decision making is difficult because you don’t want to miss out on anything. The french toast is worth it, though. It’s thickly sliced and smells like heaven, crispy on the outside and almost gooey-soft on the inside and all slathered over with soft, sweet Chantilly cream and syrup and blackberries. If you’re wondering what “Chantilly cream” is, it’s just whipped cream. Like I said, they’re snobbish. It’s wonderful. 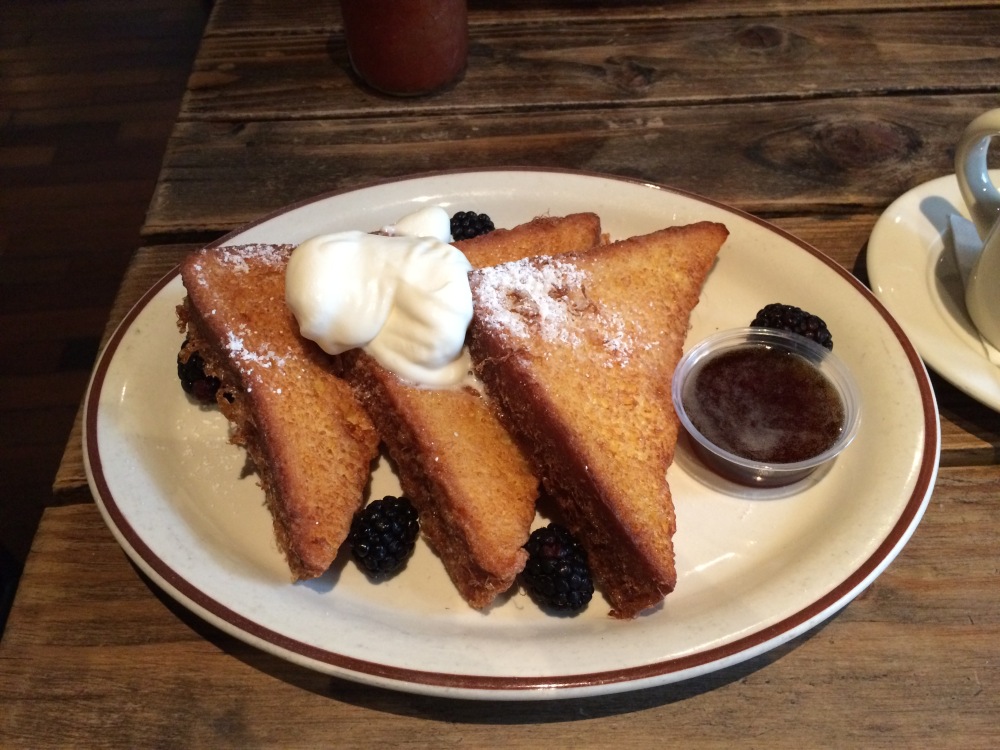 On other occasions we’ve tried the breakfast sandwich and the pork hash. The sandwich is easily their lightest item, and all of the ingredients are served stuffed in a small naan-style bread. The hash is served in a skillet that sizzles as it’s brought to the table, signaling to your ears, Pavlovian-style, that it’s time to eat.

Even though we had ordered a cocktail, our bill came out to $32, after tax, pre-tip. The food isn’t mind-blowing, but they’re creative and friendly, and the food never lets you down. 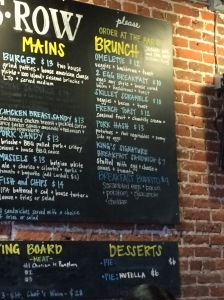 (The bar is different enough in the evenings that we will write a separate review – coming soon!)