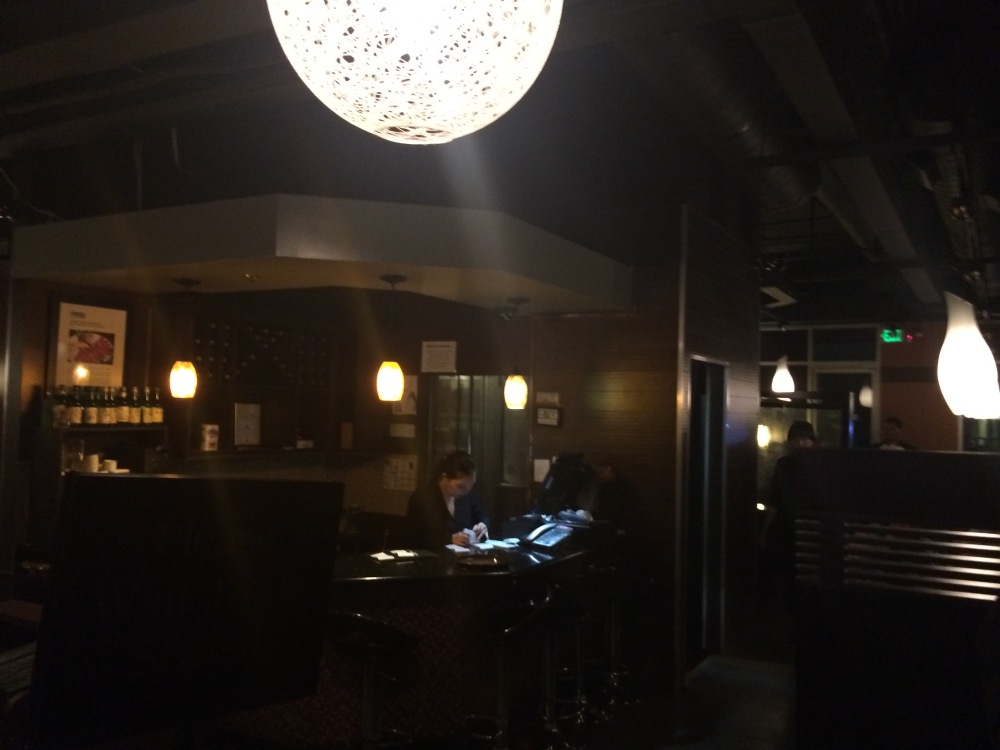 Most recently rated no. 6 on Los Angeles Eater’s list of best Korean BBQ places in L.A., Genwa is definitely worth a trip. However, if you’re going on a weekend, call ahead. Genwa won’t make reservations if your party is small, but they will cut your wait time in half. After wandering around the city for 40 minutes getting hungrier, we were led through the smoky rich aroma of cooking meat to a table for 4.

Mengsha: At least, that’s what it says on the menu. In reality, they are selling themselves short. The first course – a small bowl of Steamed Egg – wasn’t even listed as an item. Steamed egg seems to be an Asian specialty. It’s not hard to make. The version I grew up with went something like this: beat 1 part egg into 1 part water, add soy sauce and sesame oil, and maybe green onion, then steam until set. It comes out as a savory custard with the texture of silken tofu. This version, however, was so savory that I suspect they had replaced the water with a seafood broth. Between the four of us, we each got two bites. It was the perfect appetizer, and left us hungrier than before.

The next stage can only be described as a flurry of activity. In a matter of minutes, we found ourselves with small dishes of salt and sesame oil for dipping, hot sauce, pickled daikon, rice noodle sheets, and garlic. A smattering of veggies (onion, bell pepper, mushrooms, bananas) heated on the grill. One waiter cracked a small bottle of soju, and using the twist-off cap, cut a piece out of a lemon. A squeeze of lemon juice went into each shot-sized glass and then he topped each off from the bottle and passed it to us. Another waiter showed up with a salad in a mild vinaigrette, and then twenty-two banchans (small Korean side dishes) hit the table and were arranged around the fire. Pickled daikons and jalapeno, kimchi and chili-rubbed squash, omelette, potato salad, greens and bean sprouts in sesame oil, marinated peppers, cubes of beef in a sweet sauce, crunchy transparent noodles. And these are only the ones we could venture a guess at. Identifiable or not, all were delicious. Shortly after that, yet another waiter (I’d lost track of them all by this point) placed our first meat course – Wagyu – onto the fire.

Wagyu, if you’re unfamiliar with the term, are breeds of Japanese cattle known for the quality of its marbling. The breed of Wagyu you’re most likely familiar with is Kobe, and American Style Kobe, which tends to be much more affordable than the imported product, is Wagyu cattle crossbred with our common Angus.

We sampled and exclaimed over the banchan to beat back hunger pangs while watching the Wagyu sizzle on the grill. They say hunger is the only spice you need. The meat is flavorful enough on its own and amazingly tender. The salt and sesame dip is just the icing on the cake. The soju was crisp and sweet and cold – a perfect refreshing accompaniment to the beef.

At most Korean BBQ places, you cook the meat yourself. This is not one of those places. You are welcome to do it – the tongs and scissors are left on the table – but more often a waiter or waitress will walk by and flip the pieces of meat over or cut the cooked pieces in half, signaling that they’re ready to eat. The service is incredibly efficient, and feels almost as if you have found yourself inside a perfectly oiled machine: reliable, but impersonal.*

*This was our second time eating at Genwa. For some reason, I didn’t feel this way on our first visit, though it had been just as efficient. Maybe on that occasion we got luckier with our waiter?

Next, we were served Japchae – chewy sweet potato noodles stir-fried with vegetables and beef in a nutty sesame and soy sauce reminiscent of peanut butter. This style of transparent noodles is known as “glass noodles” or “cellophane noodles,” and is present in many different Asian cuisines, though different countries may use different types of flour or starch to make them. Genwa’s was very authentically Korean, and they contrasted well with the Wagyu we’d just eaten.

Now is a good time say that one of Genwa’s main strengths is their pacing, at least if you order a preset meal. Normally, people go to Korean barbeque restaurants to gorge themselves on meat. Needless to say, this leaves you feeling pretty gross after the meal. However, at Genwa, the meat courses are interspersed with servings of vegetables, noodles, and rice, which act as intermissions during the meal. And, for variety, there’s always more banchan. After a meal at Genwa, you feel full but not disgusting, and you won’t leave with the feeling that it’ll take a week for the smell of meat grease to finally fade from your clothes.

Nothing in Beef Land can hold a candle to Wagyu in terms of texture. But the Kot Sal (boneless short ribs) certainly gave it a run for its money. The Kot Sal was marginally tougher, but whether it was due to the cut or the breed or the fact that the grill was now greased, made up for that with a stronger meaty flavor.

Around this time a steaming bowl of bibimbap appeared at our table. Our server mixed it with chili paste at the table, and then left it to sit so that the bottom of the bowl could crisp up. The bibimbap was good, but at this point in the meal, after having already sampled delicious Wagyu, Kol Sat, and Japchae, it no longer had the spice of hunger to elevate its flavor. Had we been served the bibimbap at the beginning of the meal, we probably would have been much more effusive in our praise towards it.

Next up on the menu was the Prime Galbi, marinated short ribs. When they arrived raw, you could see they were slathered with a clear, sweet-smelling glaze that likely consisted of sesame, soy sauce, vinegar, and sugar. It was basically Korean barbeque sauce. While quite good, we both preferred the unadulterated, pure taste of the Wagyu and Kol Sat. The Galbi seemed to be the course that catered the most to American palates. At this point in the meal, our stomachs and taste buds may have been oversaturated with the flavor of meat, and things were definitely starting to wind down.

The piece on the left side of the plate of Galbi is the actual short rib bone of the cut; it too was thrown onto the grill. The short rib meat was extremely tough and sinewy; it was a jarring juxtaposition with every other meat course we’d sampled earlier.

The last course was a seafood course consisting of three large butterflied shrimp and two scallops. This was to be split amongst 4 people, which was confusing, to say the least. If the quality had been good, such a small thing would have been easily forgiven. Unfortunately, it was clear that the seafood had been very recently defrosted. Scallops are difficult to cook at the best of times; they are tender and sweet when perfect, and stringy when the least bit overcooked. For some reason, one of the scallops was twice the size of the other. When we cut it in half to share, we found that the scallop had picked up delicious meaty flavors from the grill, but that the outside had been cooked but the inside was still cold. The shrimp were almost prawn-sized, peeled and headless, but they were tough once cooked and did not have the strong flavor of shrimp that are fresh. The course was disappointing, but only because Genwa had set our expectations so high. It is unfortunate that they chose to order their courses this way, because we almost ended our meal on a low note.

But they weren’t done. As they piled empty banchan dishes on a platter to be taken back to the kitchen, they left us one last course: a mild and sweet cinnamon-ginger dessert punch. It was almost like a syrup but light and refreshing. It was a delightful surprise and a great end to the meal. As we sat there, satisfied and reminiscing over our meal, a dish of marshmallow-shaped hand towels expanded as hot water was poured over them. Our waiter brought us our check, and as he did, left us each with a long stemmed lollipop.

Overall it was a good meal, with delicious food and wonderful service, at a reasonable price. We paid about $40 apiece. But a great restaurant is a performance, indulging the diners in the fantasy of being royalty, being a part of a different culture, or experiencing art with all of the senses. There were a few small things during Genwa’s performance that shook us, forcibly, out of this fantasy and back to the real world, most noticeably the last course of short rib, as well as the seafood course. These made it difficult to fully appreciate all the things that Genwa got right, which prevents us from giving it the 4.5 stars we so badly want to give it.